John Bostwick, Sr. was born in 1859, the son of Green Berry Bostwick and Ann Frances Hester Bostwick, originally of Greene County, Georgia. He was raised on his father’s farm in Morgan County and educated at the Braswell rural school in the northern part of Morgan County. The school was located almost adjacent to his father’s property near the border of Walton County. He attended the nearby University of Georgia, graduating in 1883 with a Bachelor of Engineering degree.

Upon graduation, John Bostwick accepted a job as school teacher at the Braswell School. He remained in this position for two years, also, as one of the area’s finest college graduates, he became increasingly involved in county affairs. He was elected Justice of the Peace in 1884, holding the position until 1896.

In 1885 Bostwick married Susie Green, the daughter of Henry Harden and America Malcom Green of Walton County. The same year Bostwick gave up teaching for farming, presumably taking over a family property in Morgan County. According to the family tradition, he saved enough money as a teacher to buy a mule and was also able to purchase more land, which was then available at 2-3 dollars an acre. Bostwick was a successful cotton farmer, during a period of growing cotton wealth. On the basis of his success, he started a small mercantile business in 1892 on his property. In 1901 he also constructed a cotton oil mill, which soon became known as the Bostwick Manufacturing Company.

As part of his overall development scheme, Bostwick helped in 1901 establish a spur-line from the Central of Georgia Railroad. This connected his property with the Macon and Athens Branch at the nearby Morgan County community of Apalachee. The line, which became known as the Greene County Line railroad, eventually connected Bostwick with Monroe to the North, thereby tying Bostwick’s various businesses into a regional transportation network.

A post office branch had been established in the Bostwick Supply Company, the area’s “country store”, in 1895; and in 1902 the town was incorporated by an act of the Georgia Legislature. John Bostwick was elected mayor of the small farm-based community.

In 1902 John Bostwick Sr. built the Susie Agnes Hotel and purchased a large track of land. As the train continued to pass through this area and people stopped for overnight trips, the town of Bostwick began to develop. John Bostwick Sr. purchased a huge track of land and divided it into 122 lots for residential development. Thus, the City of Bostwick was born. The southeast side ground floor of the structure was used for commercial purposes, originally conceived by Bostwick as a provision store. He continued to run the store until 1910. Local farmers received credit and paid bills in the store. Goods were brought into the store through the rear entrance, taken from railroad carts diverted to the side directly behind the building. A shed eventually covered the loading dock, providing shelter. A well to the north of the building provided water, pumped by a small engine to a steel cistern above.

The hotel / provision store was merely one step in Bostwick’s vision for his town. While other local farmers and business men competed for space in the prospering community, Bostwick managed to buy up much of the local property. His own farm eventually extended to over 380 acres, and Bostwick also acquired property to the south of the road, primarily through the purchase of lands of another resident, Robert R. Jones. Jones had once vied with Bostwick to be the town’s founder and early maps indicate the early Jones’ properties. Jones had begun to subdivide portions of his lands south of the main street in the early 1900s. In 1908, after his purchase of the Jones lands, Bostwick hired C. Olin Jones, a civil engineer from Greenville, South Carolina to undertake a complete survey of a large section of his property south of what was labeled Main Street. A total of 122 lots were surveyed. All were intended for future residential development. A few existing properties were also incorporated in the grid-iron scheme. Additional commercial lots were surveyed along the frontage opposite the hotel and supply company. The post office, operated apparently by Mrs. Greene, and several other properties along Main Street remained in private hands. Otherwise, the town and its new hotel were essentially Bostwick’s.

Bostwick’s fortunes were reversed suddenly in the pre-World War I era, and were further compounded after the war with the sudden decline of cotton prices. Overextended like many other cotton farmers and processors, Bostwick was forced to sell off parts of his substantial commercial holdings. As early as 1910 a portion of his business, including the hotel property, was deeded to Monroe Oil and Fertilizer Company as a result of the bankruptcy of Bostwick’s development company.

John Bostwick, Sr. continuously worked for economic development in Morgan County. He served on the Board of County Commissioners, pressing for road construction and school construction. He was the main proponent of the State Agricultural School in Morgan County and was eventually elected president of the Potato Growers Association of Georgia in 1922. Before his death in 1929, Bostwick also served as a member of the Georgia Legislature.

Descendants of John Bostwick, Sr. still reside today in the town that he founded.

The Susie Agnes Hotel, listed on the National Register of Historic Places, is an intact example of a turn-of-the-century commercial and hotel building typically constructed in a small Georgia community. The building is the design of W.D. Calvin, a local Morgan County architect / builder who also designed several other buildings in Bostwick. The building was originally used as both hotel and commercial space and as a meeting space for the local Masonic Lodge.

Expecting continued growth and prosperity in the city, founder, John Bostwick, Sr. constructed the Susie Agnes Hotel in 1902 to house the growing number of traveling salesmen, or “drummers,” who came through town, visiting the supply company, and also the oil press. The hotel was reportedly named for Bostwick’s wife, Susie, and his sister, Agnes.

Bricks for the hotel were made from clay from Bostwick’s own property. Two stories in height, the hotel followed the convention of smaller hotels of the era. Apparently, only the upper floor was used for hotel rooms. Nine rooms opened off the central hallway. The original kitchen, dining area, and lobby were located on the ground floor along the northwest side. Additional rooms, apparently used for an apartment for the hotel manager and his family, were also on the ground floor. Bathrooms were located at the rear on both the ground and upper floors. The rear of the second floor was devoted mainly to a Masonic Hall, which Bostwick, an active Mason, provided for the local lodge. A separate staircase provided access from the alley to the southeast.

The southeast side ground floor was used for commercial purposes from the beginning. The space consisted of a single room, separated from the original hotel lobby, kitchen and dining room by a plank partition wall. The store was conceived of by John Bostwick, Sr. as a provision store – a use that continued under various owners through the 1970s. Under and with rail-mounted ladders, most of which remain in place today. There was also a screened store office window, at one time located near the entrance, dating from approximately 1915 but now moved to the rear of the lower floor. A well to the north provided water, pumped by a small engine to a steel cistern above. Water was then supplied by gravity to both the floors of the adjacent hotel.

As John Bostwick, Sr. had hoped, traveling salesmen stayed for a night at the hotel, eating in the downstairs communal dining area and sitting around the front lobby. The store met the provision needs of the community. Local farmers received credit and paid bills in the store, a practice passed on to successive owners.

After the bankruptcy of Bostwick’s development company in 1910, the hotel was deeded to the Monroe Oil and Fertilizer Company. Z.E. Betts and his wife purchased the hotel business in 1916 after apparently having run the business for the three previous years. The deed was held by Mrs. Mattie Betts. The Bettses altered the building to have a residence on the second floor and a grocery business on the ground floor. The Masonic Hall was converted to a kitchen and the front rooms became private sitting rooms. The hotel lobby was converted to a store and small credit business associated with the store business. Plumbing was provided for an upstairs kitchen. The small apartment at the rear of the ground floor was leased along with the Bostwick store space to another provision business. The Bettses screened in the upper gallery to provide additional seating and a summer bedroom. An additional shed appears to have been added around this time to provide a place for a barbershop run by a Mr. Fitzpatrick, according to James Betts, the son of Z.E. Betts. The shed has since been removed.

In 1925 Z.E. Betts left the business, moving his wife Mattie and five children to Atlanta. The hotel property was deeded to John S. Jackson in 1927. The drop in cotton prices and the boll weevil epidemic severely undermined the local economy. The Jackson’s continued to run the business, sometimes combining the stores and at times maintaining two stores, until 1933. Jackson also appears to have installed a gas pump for passing motorists, as shown in a ca/ 1927 postcard of the property.

The hotel had a succession of renters in the late 1930’s, including D.W. and B.H. Malcom and Hames W. McGaughey. In 1934, one store was also rented to a Col. Herbert Grant. The Malcoms finally purchased the property in 1945 from Mrs. Idelle Jackson, John S. Jackson’s widow. It was sold in turn to Lamar McDougal and his wife, Rosie, in 1946. The McDougals both ran a store and rented out one. At various times the stores were known as the Rosie McDougal Grocery, the Williams Grocery, the Rice Greene store, and the Anderson store. In the 1950s, John and Tommy Martin ran both stores. A gas pump, first installed in the 1920s was upgraded and the store doubled as a filling station. The property continued to operate occasionally as a boarding house as well, with guests taking meals in the rear second-story kitchen and using Room 14 as a common sitting room.

The store operations finally went out of business in the mid-1970s. The McDougals eventually rented out parts of the building for storage and as a used furniture store. Joseph Conrad purchased the property in 1977, considering using the building for an antique shop, but sold to Gene and Yvonne Meader in 1986. The Meader’s had also hoped to use the building as an antique store, but decided to sell, hopefully to another owner sympathetic to the old building.

Through funds raised by a group of local citizens, comprising the Save the Hotel Committee, the hotel was purchased from the Meader’s and given to the City of Bostwick in 1993. With funds raised through The Annual Bostwick Cotton Gin Festival, grants, and donations, preservation work continues on the hotel. The Susie Agnes was listed on the National Register of Historic Places in 1999. 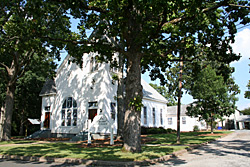 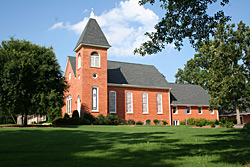 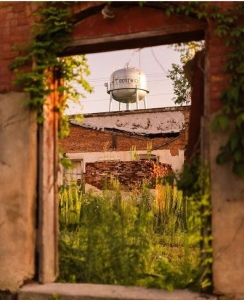 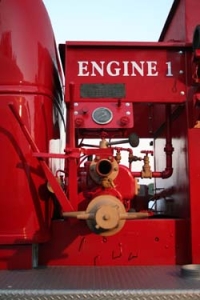